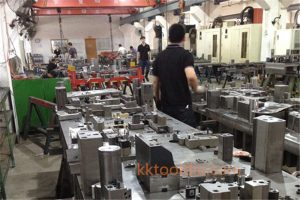 A die is a specialized tool that manufacturing industries use to shape or cut metals using a press. Similar to molds, dies are often customized to the item they pretend to create. Products made with dies range from paper clips to complex and advanced technology pieces.

Dies are very common in the automotive field. These molds are necessary to build almost every piece of a car, including exterior and some components in the engine.

Tool and die makers create dies and put them and mount them into a press to put them in production.

For the creation of sheet metal, such as automobile parts, two pieces may be needed: one called the “punch,” which performs the bending, stretching, or banking operation; and the second one, called “die block,” clamps the workpiece and gives stretching bending, and banking operations as well.

The workpiece has to go through several stages with different tools and operations to get the final form. If it’s an automotive component, there usually is a shearing operation after the main forming is complete, and then there’s an additional rolling or crimping operations to assure that sharp edges are hidden and verify the rigidity of the panel.

The production of sheet metal for automotive cars often has through various die processes. Dies will mold, bend, and stretch a sheet of metal in different ways, and some of the most common die tools are:

Progressive die stamping is a metal forming process widely used by several automotive, electronics, and appliances industries, and is the single most important process for creating sheet metal for vehicles.

The process consists of various individual workstations performing one or more operations on the metal piece. The steel strip is carried from station to station automatically and is cut at the final station.

Progressive die produces a large number of parts for low costs, and it also meets high standards of precision, accuracy, and durability.

Because of the complexity of the process, there are essential tools to ensure the quality of the product. For example, the pilots have to fix the strip into the proper positions and maintain control over it. 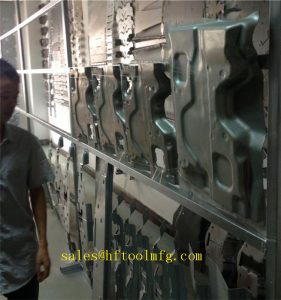 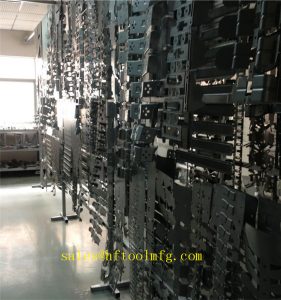